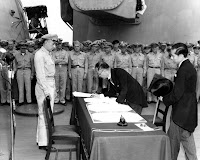 The surrender of Japan in August 1945 brought World War II to a close. By August 1945, the Imperial Japanese Navy effectively ceased to exist, and an Allied invasion of Japan was imminent. While publicly stating their intent to fight on to the bitter end, Japan's leaders at the Supreme War Council (the "Big Six") were privately making entreaties to the Soviet Union to mediate peace on terms favorable to the Japanese. The Soviets, meanwhile, were preparing to attack the Japanese, in fulfillment of their promise to the Americans and the British made at the Yalta Conference.
Read More
Posted by Jack WB9OTX at Saturday, August 15, 2009