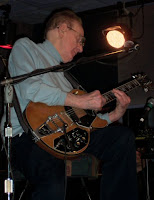 Lester William Polsfuss, known as Les Paul (June 9, 1915 – August 13, 2009) was a pioneer in the development of the solid-body electric guitar which "made the sound of rock and roll possible. His many recording innovations included overdubbing (also known as sound on sound, delay effects such as tape delay, phasing effects, and multitrack recording. His innovative talents extended into his unique playing style, including licks, trills, chording sequences, fretting techniques and timing, which set him apart from his contemporaries and inspired many of the guitarists of the present day. Read more