Richard Lee Petty (born July 2, 1937 in Level Cross, North Carolina) is a former NASCAR driver who raced in the Strictly Stock/Grand National Era and the NASCAR Winston Cup Series. "The King", as he is nicknamed, is most well-known for winning the NASCAR Championship seven times (Dale Earnhardt is the only other driver to accomplish this feat), winning a record 200 races during his career, winning the Daytona 500 a record seven times, and winning a record 27 races (ten of them consecutively) in the 1967 season alone. (A 1972 rule change eliminated races under 250 miles (400 km) in length, reducing the schedule to 30 [now 36] races.) Petty is widely considered one of the greatest NASCAR drivers of all time. He also collected a record number of poles (127) and over 700 top-ten finishes in his 1,185 starts, including 513 consecutive starts from 1971-1989.
Read more at:
http://en.wikipedia.org/wiki/Richard_Petty
http://www.pettyracing.com/main.cfm
Posted by Jack WB9OTX at Sunday, February 28, 2010 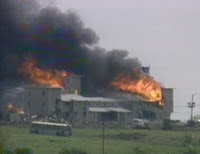 On Feb. 28, 1993, a gun battle erupted near Waco, Texas, when Bureau of Alcohol, Tobacco and Firearms agents tried to serve warrants on the Branch Davidians; four agents and six Davidians were killed as a 51-day standoff began.
(Go to article)

While your at it, read about Ruby Ridge and the ATF snipers
Posted by Jack WB9OTX at Sunday, February 28, 2010

Listing to the VOA started with an old upright console radio that received the short wave bands. I was a boy of 10 years and the year was 1955. The VOA was one of the easiest to hear with Radio Moscow as a close second. I also listened to many other countries, Radio South Africa, Radio Netherlands, BBC, and many others. Later in years I was invited to tour one of the VOA transmitters located just to the North of Cincinnati, Ohio. What a wonderful sight to see the large antennas and water cooled vacuum tubes that stood larger than I. With the cutback of funds this transmitter is now closed. The VOA was surely one of the reasons I obtained my Amateur Radio (Ham) license (WB9OTX) some 43 years ago.

Read more about the VOA from their Web Page.
Have a short wave (world band) radio? Tune in now.
Frequency List:
http://author.voanews.com/english/about/frequenciesAtoZ_e.cfm
Posted by Jack WB9OTX at Wednesday, February 24, 2010 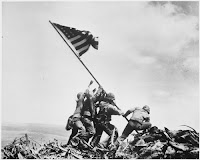 This photograph taken on February 23, 1945, by Joe Rosenthal. It depicts five United States Marines and a U.S. Navy corpsman raising the flag of the United States atop Mount Suribachi during the Battle of Iwo Jima in World War II.

The photograph was extremely popular, being reprinted in thousands of publications. Later, it became the only photograph to win the Pulitzer Prize for Photography in the same year as its publication, and came to be regarded in the United States as one of the most significant and recognizable images of the war, and possibly the most reproduced photograph of all time.
Read More
Posted by Jack WB9OTX at Tuesday, February 23, 2010 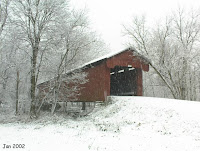 People of Versailles (including myself) only have a very short drive to see a covered bridge of noted history. As a kid I crossed this bridge with difficulty on a bike as the floor was uneven with the planking. A little later as a teen It was a nice place to set looking out the side at the sparkling Laughery creek with your best girl. On the way to the park we crossed with a few toots of the horn to warn oncoming traffic as the bridge was only one lane, but the real reason was just to hear the echo inside. I have many fawn memories of the Busching Covered Bridge and I wanted to share a few photos & facts I have found on the net with you. ......... Jack

Spanning Laughery Creek, the Busching Covered Bridge is located
east of the village of Versailles, Indiana. The Busching Bridge was
erected in 1855 by Thomas A. Hardman, a local builder who later
achieved notoriety by rebuilding many of the bridges in Dearborn and
Ripley Counties destroyed by the Confederate raider John Hunt Morgan.
The Busching Bridge is a typical example of the Howe truss, a design
which signaled the start of metal construction in bridge building.
The Howe truss system was the product of the imagination of
William H. Howe. Born into a family of inventors in 1803, he worked
as a millwright before patenting his truss system in 18A0,
The patented Innovation introduced in the Howe truss was the use
of Iron bars as tension members. The use of the iron bars and turnbuckles
made it possible to regulate the tension and overcome separation
of the upper and lower cords,a problem frequently encountered in allwood
bridges. Though the use of iron tension members was a real step
forward, a number of spectacular railroad bridge failures in the
min-nineteenth century forced the adoption of all-metal truss construction.
The wood and metal design remained workable In some rural
areas . The Busching Bridge, which is still In use, is a modified Howe
truss composed of 15 irregular bays with a clear span of 170 feet.
Both the wooden x-bracIng, which Is In compression, and the metal
tie rods, which are in tension, are of different dimensions: by
varying the sizes and dimensions of the structural members, the truss
expresses its sophisticated design. The height from peak to
roadbed Is 23 feet.

Click the links below to see some photos of the bridge. Hit the back arrow to return for another photo.

The African Queen is a 1951 American drama film adapted from the 1935 novel of the same name by C. S. Forester. The film was directed by John Huston and produced by Sam Spiegel[1] and John Woolf. The screenplay was adapted by James Agee, John Huston, John Collier and Peter Viertel. It was photographed in Technicolor by Jack Cardiff and had a music score by Allan Gray. The film stars Humphrey Bogart (who won the Academy Award for Best Actor – his only Oscar), and Katharine Hepburn with Robert Morley, Peter Bull, Walter Gotell, Richard Marner and Theodore Bikel.

The African Queen has been selected for preservation in the United States National Film Registry. 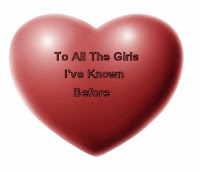 Let's try to stop this:
http://www.travishankins.com/ 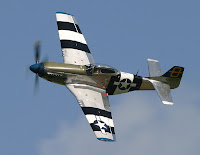 This is about a 20 minute video but very worth your time!

This is very enjoyable. There are not many of these guys left. P-51 pilot and his Mustang
This is one of the best videos I have ever seen in my whole life. It is about life, love, and the legacy left behind by a true American hero. Get the tissue out. Remarkable story, and it is a true story, of an American pilot, who has not bragged about his exploits, but rather kept his story quiet, until now, after almost 52 years.

The video has great resolution and should be watched
in "Full Screen", to do so click on the box with the arrow coming out of it in the lower right corner of the video presentation.
Posted by Jack WB9OTX at Thursday, February 11, 2010

Mike Stratton and I traveled throughout Ripley County Indiana and photographed all the plaques of historical locations. Further use of these images will include a web page and pamphlets in the future. This is just a sneak peak. Click here to see larger images or click the photo to enlarge. (update) the web page is almost finished try it at:
http://history.ripleycounty.net/ 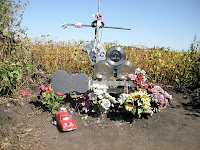 On February 3, 1959, a small-plane crash near Clear Lake, Iowa, killed three American rock and roll musicians: Buddy Holly, Ritchie Valens, and J. P. "The Big Bopper" Richardson, as well as the pilot, Roger Peterson. The day was later called The Day the Music Died by Don McLean, in his song "American Pie".
Posted by Jack WB9OTX at Wednesday, February 03, 2010

Punxsutawney Phil is a groundhog resident of Punxsutawney, Pennsylvania, USA. On February 2, (Groundhog Day) of each year, the town of Punxsutawney celebrates the beloved groundhog with a festive atmosphere of music and food. During the ceremony, which begins well before the winter sunrise, Phil emerges from his temporary home on Gobbler's Knob, located in a rural area about 2 mi (3.2 km) east of town. According to the tradition, if Phil sees his shadow and returns to his hole, the United States will have six more weeks of winter. If Phil does not see his shadow, spring will arrive early.[1] The date of Phil's prognostication is known as Groundhog Day in the United States and Canada. During the rest of the year, Phil lives in the town library with his "wife" Phyllis. A select group, called the Inner Circle, takes care of Phil year-round and also plan the annual ceremony. Members of the Inner Circle are recognizable by their top hats and tuxedos. Phil currently has two co-handlers, Ben Hughes and John Griffiths.
From: wikipedia.org
Posted by Jack WB9OTX at Tuesday, February 02, 2010