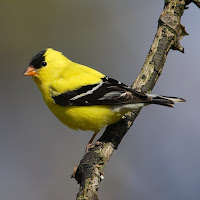 My wife and I set on our patio early in the morning with coffee. We love to just enjoy the sunrise and the birds feeding and nesting. We have several feeders and bluebird houses in our yard. I make a joke saying the bird feed costs more than our food. We have as many as 15 or more Goldfinch feeding at one time. I wanted to know if the Goldfinch would be with us in the Winter or move South as colder weather arrived. I turned to Wikipedia Encyclopedia for the answer. There it was in black & white, isn't the internet great............Jack
<<<<<<<<<<<<<<<<< >>>>>>>>>>>>>>>>>>

The American Goldfinch (Carduelis tristis), also known as the Eastern Goldfinch and Wild Canary, is a North American bird in the finch family. It is migratory, ranging from southern Canada to North Carolina during the breeding season, and from just south of the Canadian border to Mexico during the winter.

The only finch in its subfamily which undergoes a complete molt, the American Goldfinch displays sexual dimorphism in its coloration; the male is a vibrant yellow in the summer and an olive color during the winter months, while the female is a dull yellow-brown shade which brightens only slightly during the summer. The male displays brightly colored plumage during the breeding season to attract a mate.

The American Goldfinch is a granivore and adapted for the consumption of seedheads, with a conical beak to remove the seeds and agile feet to grip the stems of seedheads while feeding. It is a social bird, and will gather in large flocks while feeding and migrating. It may behave territorially during nest construction, but this aggression is short-lived. Its breeding season is tied to the peak of food supply, beginning in late July, which is relatively late in the year for a finch. This species is generally monogamous, and produces one brood each year.
Read more

From Wikipedia, the free encyclopedia
Posted by Jack WB9OTX at Sunday, August 30, 2009