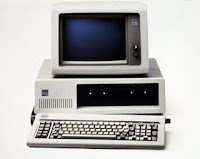 The IBM Personal Computer, commonly known as the IBM PC, is the original version and progenitor of the IBM PC compatible hardware platform. It is IBM model number 5150, and was introduced on August 12, 1981. It was created by a team of engineers and designers under the direction of Don Estridge of the IBM Entry Systems Division in Boca Raton, Florida. Alongside "microcomputer" and "home computer", the term "personal computer" was already in use before 1981. It was used as early as 1972 to characterize Xerox PARC's Alto. However, because of the success of the IBM Personal Computer, the term came to mean more specifically a microcomputer compatible with IBM's PC products.
Read more
Posted by Jack WB9OTX at Wednesday, August 12, 2009