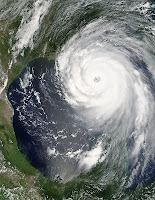 On the morning of Monday, August 29 in southeast Louisiana. It caused severe destruction along the Gulf coast from central Florida to Texas, much of it due to the storm surge. The most severe loss of life and property damage occurred in New Orleans, Louisiana, which flooded as the levee system catastrophically failed, in many cases hours after the storm had moved inland.
Read the full story
Posted by Jack WB9OTX at Saturday, August 29, 2009