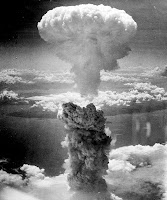 The atomic bombings of Hiroshima and Nagasaki were nuclear attacks near the end of World War II against the Empire of Japan by the United States at the executive order of U.S. President Harry S. Truman on August 6 and August 9, 1945, respectively. After six months of intense fire-bombing of 67 other Japanese cities, followed by an ultimatum which was ignored by the Sho-wa regime, the nuclear weapon "Little Boy" was dropped on the city of Hiroshima on Monday, August 6, 1945, followed on August 9 by the detonation of the "Fat Man" nuclear bomb over Nagasaki. These are to date the only attacks with nuclear weapons in the history of warfare.
Read More