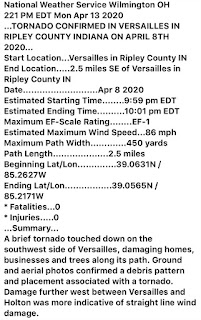 Apr. 8, 2020
A savior thunderstorm warning and a tornado watch had been posted about 45 minutes before all hell broke loose. There was reports of damage in Jackson county to the West, this report came over the police scanner. The first sign was a roar of the wind then debris of things hit the picture window in the living room. I had never heard this intense thumping before on the window. I hurried my wife Betty into the wheel chair and rolled her into our small bathroom, covered her with a blanket. I could hear crash, boom, thump coming from the roof  and walls. I have to tell you I was frightened like never before in a wind storm. The lights went out and in a few minutes the noise of the wind quit as fast as it had began. There was very little lightning with this storm, just a few cloud to cloud rumbling. Oil and battery lamps were lit. Betty was wheeled out of her safe bathroom location to the darkened living room. I took a flashlight and shined out the door to the car port. There was sticks leaves and all kinds of junk there.I ventured into the back yard and seen the radio tower with all of the giant antennas crushed to the ground. I could see that the trees were broken and large limbs were all about in the yard. I turned off the power to the breaker box to the radios and computers in the radio room. Our  power was off for about 2 days, but REMC was much faster than Duke restoring the electric. My internet is still out and I don't expect it to be restored for a few days. The coax from the power pole across the road is broken. We are now waiting on the insurance adjuster to arrive. All in all we are safe and the things that are damaged and broken can be fixed in time. We were lucky.
Jack 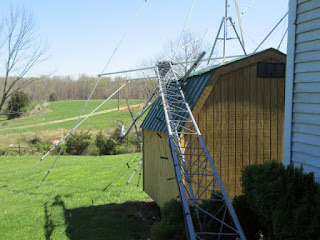 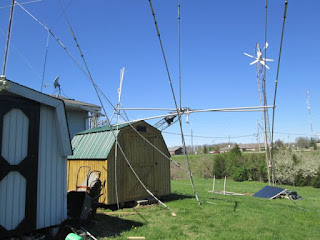 For the last few days I have been working with the Statton - Karsteter Funeralhome in Versailles with a make over of their Web Page. If you have a few minutes please look the page over.
The Web address is:
https://www.skfuneralhome.com/
Also there are some local photos that you may find interesting.
Jack WB9OTX
Posted by Jack WB9OTX at Saturday, April 04, 2020

We are almost two weeks into self-isolation and it’s very upsetting for me to witness my wife standing at the dining room window staring aimlessly into space with tears running down her cheeks. It breaks my heart to see her like this. I’ve thought very hard of how I can cheer her up. I’ve even considered letting her in. But rules are rules.
Posted by Jack WB9OTX at Friday, April 03, 2020