The first time I met Mr. Huelson was in 1967, I was called by phone and was told to report to the police post. Upon arriving I was escorted into Norman's office, it seemed I had possession of top secret State Police signal and ten codes. I obtained these codes from a lady that was attending a dispatcher class at the Vocational School. Several of my radio friends had tunable police receivers (this was before scanner radios) and wanted a copy of these codes. Where I made my mistake was having a high school radio friend take the codes to school to copy. He gave the papers to a girl in typing class to retype with carbon paper inserted to increase the number of copies made. She didn't have the free time in her class so she took it home to retype on her dad's office typewriter. Copies were made and the carbon paper was put into the waste can next to the desk. Oh, I forgot to tell you, the girl was Mr. McClain's daughter, and Mr. McClain was the Sheriff of Ripley County. It seems he found the discarded carbon paper in the trash. The sheriff thought this was super top secret material and reported it at lightning speed to Mr. Huelson at the State Police Post. Mr. Huelson ask if I had the codes, I said I did at home. He ask why I had the codes, I told him I did not have them memorized yet and needed to look a few up as I heard them. I told him they were not secret or illegal to have. He said just set there while I call Conersville. Wow ! he was using the green phone. I had only heard about the green phone and now I was seeing it in action. The green phone was really the color of green and it was a direct microwave link to Connersville or who knows where else. I was close enough to hear him say OK, yes sir, all right, and thank you, then green phone was hung up. Mr. Huelson just said go over to the sheriff's office, he wants to talk to you. Off I went across Versailles to see the sheriff. I walked in the office and said I'm Jack Demaree, Mr. Huelson said you wanted to see me. He said I don't like the public looking at these codes and furthermore I don't like you involving my daughter in illegal acts. He had a real gruff tone to his voice and I must say I was beginning to get very nervous. I took a deep breath and said I don't think there is anything illegal about having these codes, they were passed out at the Vocational School by Mr. Canon a radio operator for the State Police. The Sheriff said, just set there and be quite. He picked up the phone and I presumed he called Mr. Huelson at the State Police Post. It was a repeated conversation of what I heard from the green phone. A lot of OKs and alrights. He hung the phone up, turned toward me, and with an evil look just said, "Here is your codes, I don't want to see you in here again", Out I went.

Later in years I would run across Norman Huelson many times, Norman would always say in a joking manner, "Have you memorized those ten codes and signals yet"? "How are you and the sheriff getting along"? Norman and I became good friends later on in years. Many others, I included, will miss Norman greatly.
By: Jack Demaree 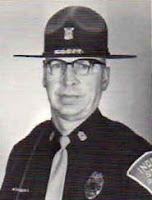