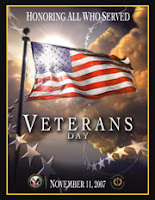 Veterans Day is an American holiday honoring military veterans. Both a federal holiday and a state holiday in all states, it is celebrated on the same day as Armistice Day or Remembrance Day in other parts of the world, falling on November 11, the anniversary of the signing of the Armistice that ended World War I. (Major hostilities of World War I were formally ended at the 11th hour of the 11th day of the 11th month of 1918 with the German signing of the Armistice.)

Veterans Day is largely intended to thank living veterans for their service, to acknowledge that their contributions to United States national security are appreciated, and to underscore the fact that all those who served - not only those who died - have sacrificed and done their duty.