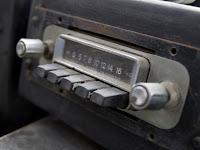 As an almost 64 year old teenager who remembers the good times of the late 50's and early 60's before heading into the army, I can attest to the fact that WIBC (1070 Khz) was the in station then with "Easy" Gwin during the afternoon, WSAI (1360 Khz) with Dusty Roads, and WLS (890 Khz) with Dick Biondi at night. It was fun cruising the drive-ins like The Dog n' Sudds and Frisch's. Those were the days for listening to Rock and Roll with your car's A.M. radio, There was no F.M. yet in cars. A.M. radios in cars or home now have very poor receivers and the mighty clear channel stations have cut their power to conserve electric. Yes A.M. is about a thing of the past, What a shame.
Posted by Jack WB9OTX at Tuesday, July 14, 2009