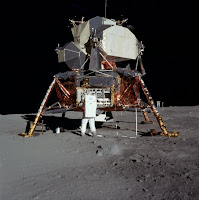 The Apollo 11 mission was the first manned mission to land on the Moon. It was the fifth human spaceflight of Project Apollo and the third human voyage to the Moon. Launched on July 16, 1969, it carried Mission Commander Neil Alden Armstrong, Command Module Pilot Michael Collins, and Lunar Module Pilot Edwin Eugene 'Buzz' Aldrin, Jr. On July 20, Armstrong and Aldrin became the first humans to walk on the Moon, while Collins orbited above.
Read the full article

From Wikipedia encyclopedia
Posted by Jack WB9OTX at Thursday, July 16, 2009