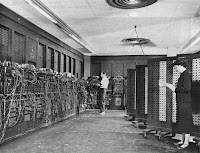 ENIAC, short for Electronic Numerical Integrator And Computer, was the first general-purpose electronic computer. It was a Turing-complete, digital computer capable of being reprogrammed to solve a full range of computing problems. ENIAC was designed to calculate artillery firing tables for the U.S. Army's Ballistic Research Laboratory, but its first use was in calculations for the hydrogen bomb.
When ENIAC was announced in 1946 it was heralded in the press as a "Giant Brain". It boasted speeds one thousand times faster than electro-mechanical machines, a leap in computing power that no single machine has since matched. This mathematical power, coupled with general-purpose programmability, excited scientists and industrialists. The inventors promoted the spread of these new ideas by teaching a series of lectures on computer architecture.
Read More