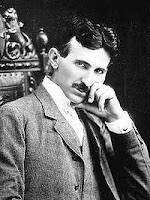 Nikola Tesla's birthday is coming up on the 10th, so I thought I'd read a bit about the man that received little credit for his work......Jack

After his demonstration of wireless communication (radio) in 1894 and after being the victor in the "War of Currents", he was widely respected as one of the greatest electrical engineers who worked in America. Much of his early work pioneered modern electrical engineering and many of his discoveries were of groundbreaking importance. During this period, in the United States, Tesla's fame rivaled that of any other inventor or scientist in history or popular culture, but due to his eccentric personality and his seemingly unbelievable and sometimes bizarre claims about possible scientific and technological developments, Tesla was ultimately ostracized and regarded as a mad scientist. Never having put much focus on his finances, Tesla died impoverished at the age of 86.
Read much more


From Wikipedia, the free encyclopedia
Posted by Jack WB9OTX at Monday, July 06, 2009