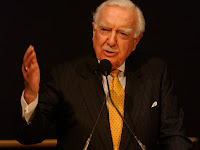 Walter Leland Cronkite, Jr. (November 4, 1916 – July 17, 2009) was an American broadcast journalist, best known as anchorman for the CBS Evening News for 19 years (1962–81). During the heyday of CBS News in the 1960s and 1970s, he was often cited in viewer opinion polls as "the most trusted man in America" because of his professional experience and kindly demeanor. Walter was also an Amateur Radio Operator. (KB2GSD) "Amateur Radio is the only fail safe communications in the world". Walter Cronkite
Read More