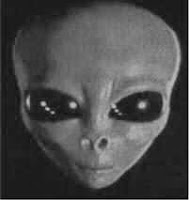 At approximately 16:15 CST on Tuesday November 7, 2006, federal authorities at Chicago O'Hare International Airport received a report that a group of twelve airport employees were witnessing a metallic, saucer-shaped craft hovering over Gate C-17.
The object was first spotted by a ramp employee who was pushing back United Airlines Flight 446, which was departing Chicago for Charlotte, North Carolina. The employee apprised Flight 446's crew of the object above their aircraft. It is believed that both the pilot and co-pilot also witnessed the object.
Read More