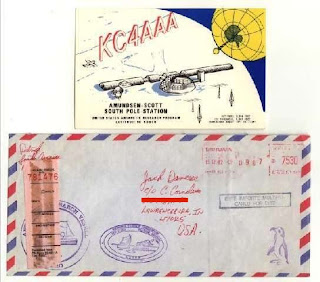 I have been interested in Antarctica for a long time and read about anything I can find on the subject. My interest came about quiet by accident in 1980. You see I am a Ham Radio Opperator and while dialing my receiver across the twenty meter band I heard the word Lawrenceburg. This is a town about twenty-five miles from where I live. To my surprise the call sign this fellow was using was KC4AAA, this told me he was located at the South Pole. When he signed off with the station he was in conversation with I called him, he answered and told me his name was Pat and his home town was Lawrenceburg, Indiana. This was the start of a friendship with his family and Pat. I would connect my radio to the telephone lines so Pat at the Pole could talk to his parents and other friends here in the states. Other people at the pole would want me to do a phone patch as it was called to their friends also. Pat and I had a schedule two times a week starting at midnight, if I remember correctly that was three in the afternoon at the pole, they were on the same time as Christchurch, New Zealand. Sometimes other stations on the Antarctic continent would call and want me to run phone patches for them after Pat and I were finished. I was leaving the house for work at four A.M. at that time so it was pretty hard on me not getting much sleep, but I loved doing it. I did this phone patching for the fellows at the Pole for two years. I could tell you some very interesting stories about things that took place in that two year period, two stick out in my mind very vivid. I received a call about three in the afternoon, I had just walked in my home from work. The voice on the phone was very low and I could tell from the tone something was wrong. The young lady in a very quivering voice ask if I was the one that talked to the South Pole, I told her yes. She said she had to get a message to her brother there and could I do it. I told her I thought I could but it depended on the radio propagation and the time of day. Sometimes it is not possible but I would try that night. I ask what is your brothers name and what do you want to tell him. She began to cry. I knew it was going to be bad news. After a time she finally said tell him Mom has died. She gave me the details to pass on. I told her I would do my best to get the message through to her brother and I would call her back when I delivered the message. That night at 11PM I started calling on our sched frequency as I thought they may just be listing early. At about 11:45 my time I heard, "WB9OTX this is KC4AAA go ahead". It was my friend Pat, I told him the name of the man and that I had very bad news for him from his sister. I wanted Pat to tell him but he said he would call him on the all-call (intercom) and have him speak over the radio to me. This was one of the worst moments in my life when Pat told me he was at the radio listening and for me to go ahead with the message. I told him about his Mother in the same words as his Sister had told it to me. I felt very bad about telling him this as I knew nothing could be done to get him out from the continent and back home. Nothing comes or goes from the Pole in the Winter-Over period except radio waves. I told him I could call his Sister and run a phone patch to her, but he said no. He told me to call her in the morning and tell her he had received the message and to be strong. I called his Sister the next morning and told her what he had said. She thanked me over and over again. I ask her how she got my telephone number, she said the National Science Foundation gave it to her. To this day I have no Idea how or why they had my name and phone number. Remember, "big brother is always listening".

One more story I remember that I want to tell, but I am out of time so it will have to wait till tonight or tomorrow.

To be continued …………. Read more about Antarctica from my Blog's past posts at:
http://wb9otx.blogspot.com/search?q=Antarctica

Read an article that was published in World Radio magazine by my wife Betty Demaree named
"Echoes From Antarctica" at:
http://www.worldradiomagazine.com/wro_issues/2010/WRO_0210_01-11.pdf
Posted by Jack WB9OTX at Saturday, December 01, 2012