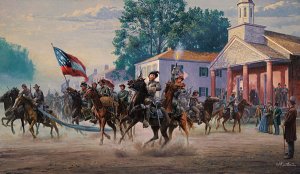 It was a normal lazy Saturday afternoon in Versailles, the town clock atop the courthouse in Versailles struck 4 times, a few moments later gun fire was heard coming from the Northwest side of the square. The smell of black powder filled the air and the gallop of horses was heard, a small group of foot soldiers dressed in blue appeared from behind the courthouse firing rifles and pistols at a large horse mounted group of  men in tattered gray uniforms.

The sidewalks were filed with ladies adorned with beautiful dresses, hats, and parasols. The few men present were overcome and captured. They were tied and bound with rope and made to lie face down in the street. The Ripley County official in charge of the coffers was harassed and made to turn over the County's wealth to Colonel John Morgan.

Morgan's men pilfered the shops around the town square of anything an army could use. A few townspeople tried to hold the Courthouse Inn, but soon were overcome, The Raiders emptied the shelves of all bitters and spirits. After about one hour of drinking and shooting Colonel John Morgan ordered the men out of Versailles to the North.

Was it 1863 ?, No it was 2003. A great re-enactment that I hope will become an annual event here in Versailles Indiana, County of Ripley.
Jack Demaree

See the photos at:
http://ripleycounty.net/morgan/morgan.html