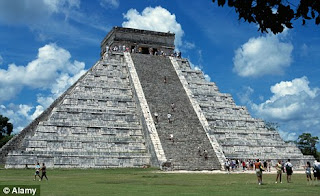 Scientists insist there is no dire threat on the horizon, while Mayan experts stress that the ancient civilisation’s legacy has simply been misinterpreted.
‘Nothing bad will happen to the Earth in 2012,’ says NASA on its website in the reassuring tones of a parent dealing with a frightened toddler.
‘Our planet has been getting along just fine for more than four billion years, and credible scientists worldwide know of no threat associated with 2012.
Read more