Will Rogers and Wiley Post die in plane crash 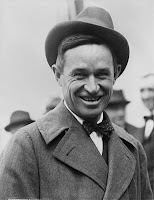 Post and Rogers on August 15, 1935 left Fairbanks, Alaska for Point Barrow. They were a few miles from Point Barrow when they became uncertain of their position in bad weather and landed in a lagoon to ask directions. On takeoff, the engine failed at low altitude, and the aircraft, uncontrollably nose-heavy at low speed, plunged into the lagoon, shearing off the right wing and ending inverted in the shallow water of the lagoon. Both men died instantly.
From Wikipedia, the free encyclopedia
Posted by Jack WB9OTX at Tuesday, August 14, 2012