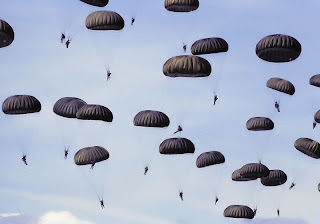 Airborne forces are military units, usually light infantry, set up to be moved by aircraft and 'dropped' into battle. Thus they can be placed behind enemy lines, and have an ability to deploy almost anywhere with little warning. The formations are limited only by the number and size of their aircraft, so given enough capacity a huge force can appear "out of nowhere" in minutes, an action referred to as vertical envelopment.
Read More
Posted by Jack WB9OTX at Saturday, August 11, 2012