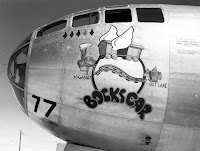 9 August 1945
A B-29 bomber called Bockscar dropped an atomic bomb named "Fat Man", devastating Nagasaki, Japan. Bockscar, sometimes called Bock's Car or Bock Gime, is the name of the United States Army Air Forces B-29 bomber that dropped the "Fat Man" nuclear weapon over Nagasaki on 9 August 1945, the second atomic weapon used against Japan. It was assigned to the 393d Bomb Squadron, 509th Composite Group. The name painted on the aircraft after the mission is a pun on "boxcar" after the name of its aircraft commander, Captain Frederick C. Bock.
Note from Jack:
We all remember Col. Paul Tibbets, but what was the pilot's name that dropped the Fat Man bomb? Find out HERE
See a video of a B-29 Shot at Lunken airport near Cincinnati, Oh. a few years ago. The camera was held by the late Denny Retherford and edited by Jack Demaree.
Posted by Jack WB9OTX at Thursday, August 09, 2012