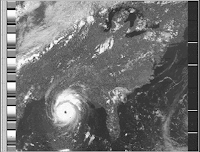 Hurricane Andrew made landfall in South Florida, the third most powerful Category 5 system to hit the United States during the 20th century.
At this time I was receiving weather satellite images direct with home brew parabolic and nondirectional antennas. Dedicated receivers, preamplifiers, and a 1991 DOS computer were fine tuned to receive many images. The image that is what I consider my best was one of Hurricane katrina as it made land fall at the gulf coast. This equipment was retired when the images became available to everyone from the internet. It was a challenge and I was one of the very few to accomplish this feat. What's next? .... Jack WB9OTX
Click the image to enlarge
Read more at wikipedia