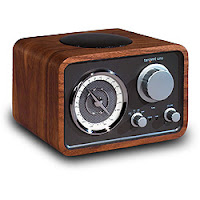 Before the Institute of Radio Engineers in New York, American electrical engineer and inventor Edwin Howard Armstrong presented his study on using frequency modulation for radio broadcasting. Read more about Armstrong from wikipedia.
I am old enough to remember when FM radio was was just a sideline of the big AM stations. In the 1950s and even in the early 60s there were few FM home receivers and no cars had FM. I can't remember the first car I owned that had an FM radio, I know my 57 chev had none. It must have been in the late 60s or early 70s and I'm sure it was an option. The first FM radio was purchased with the money from the sale of a calf. It was an A and B battery powered and the cost was about $60. That was big money back then. The 90 volt big battery was short lived and cost about $6. The FM stations only played what is now known as elevator music with no or very few commercials. As a kid I did not listen to the FM band very often. Armstrong received a very undeserved welcome with his invention by RCA, and Westinghouse. .......... Jack
Posted by Jack WB9OTX at Sunday, November 06, 2011