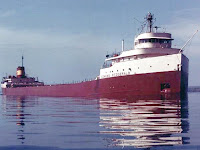 The SS Edmund Fitzgerald was a 729-foot (222 m) Great Lakes freighter that made headlines after sinking in Lake Superior in a massive storm on November 10, 1975, with near hurricane-force winds and 35-foot (11 m) waves. The Fitzgerald suddenly sank approximately 17 miles (27 km) from the entrance to Whitefish Bay, at a depth of 530 feet (160 m). Her crew of 29 perished without sending any distress signals, and no bodies were recovered; she is the largest boat to have sunk in the Great Lakes. The Fitzgerald carried taconite from mines near Duluth, Minnesota, to iron works in Detroit, Toledo and other ports. Many theories, books, studies and expeditions have examined the cause of the sinking. Her sinking is one of the most well-known disasters in the history of Great Lakes shipping and is the subject of Gordon Lightfoot's 1976 hit song, "The Wreck of the Edmund Fitzgerald".
Read More
Posted by Jack WB9OTX at Thursday, November 10, 2011