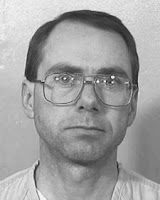 Terry Nichols
After a federal trial in 1997, Nichols was convicted of conspiracy to use a weapon of mass destruction and eight counts of involuntary manslaughter for killing federal law enforcement personnel. He was sentenced to life imprisonment without the possibility of parole because the jury deadlocked on the death penalty. He was also tried in Oklahoma on state charges of murder in connection with the bombing, and was convicted in 2004 of 161 counts of first degree murder, which included one count of fetal homicide, first degree arson, and conspiracy. As in the federal trial, the state jury deadlocked on imposing the death penalty. He was sentenced to 161 consecutive life terms without the possibility of parole, and is incarcerated in ADX Florence, a super maximum security prison near Florence, Colorado. Only three people, McVeigh, Nichols and Michael Fortier were ever indicted for the bombing.
From Wikipedia
Posted by Jack WB9OTX at Wednesday, May 26, 2010