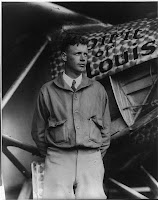 The Spirit of St. Louis (Registration: N-X-211) is the custom-built single engine, single seat monoplane that was flown solo by Charles Lindbergh on May 20–21, 1927, on the first non-stop flight from New York to ParisOrteig Prize.[1] for which Lindbergh won the $25,000 Lindbergh took off in the Spirit from Roosevelt Airfield, Garden City (Long Island), New York and landed 33 hours, 30 minutes later at Le Bourget Aerodrome in Paris, France.