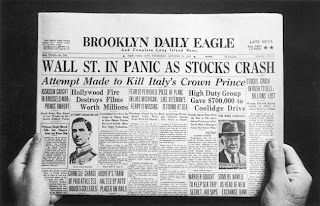 Three phrases - Black Thursday, Black Monday, and Black Tuesday - are used to describe this collapse of stock values. All three are appropriate, for the crash was not a one-day affair. The initial crash occurred on Black Thursday (October 24, 1929), but it was the catastrophic downturn of Black Monday and Tuesday (October 28 and October 29, 1929) that precipitated widespread panic and the onset of unprecedented and long-lasting consequences for the United States. The collapse continued for a month.

Economists and historians disagree as to what role the crash played in subsequent economic, social, and political events. The Economist writes, "Briefly, the Depression did not start with the stockmarket crash." In 1929, The Economist wrote, "Can a very serious Stock Exchange collapse produce a serious setback to industry when industrial production is for the most part in a healthy and balanced condition?" The crash in America came near the beginning of the Great Depression, a period of economic decline in the industrialized nations, and led to the institution of landmark financial reforms and new trading regulations.
Read More at:
http://en.wikipedia.org/wiki/Wall_Street_Crash_of_1929
Posted by Jack WB9OTX at Wednesday, October 29, 2008