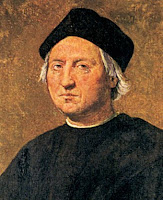 Christopher Columbus was an Italian navigator, colonizer and explorer whose voyages across the Atlantic Ocean led to general European awareness of the American continents in the Western Hemisphere. Though not the first to reach the Americas from Afro-Eurasia — preceded some five hundred years by Leif Ericson, and perhaps by others — Columbus initiated widespread contact between Europeans and indigenous Americans. With his several hapless attempts at establishing a settlement on the island of Hispaniola, he personally initiated the process of Spanish colonization which foreshadowed general European colonization of the "New World." (The term "pre-Columbian" is usually used to refer to the peoples and cultures of the Americas before the arrival of Columbus and his European successors.)

The rest of the story

I am glad to see in print that Leif Ericson is credited as one of the first.
jack
Posted by Jack WB9OTX at Sunday, October 12, 2008