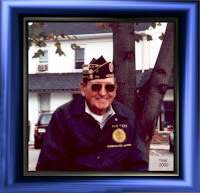 I have just posted a video to YouTube that contains an interview from Herman Jahnigen. Hermam tells of his experience after parachuting behind the lines in the Normandy D-day invasion. Herman was a very good friend of mine and a tough old bird but he would tear up when we talked about his war years. I know he left out a lot of the very bad things he experienced. This interview was conducted by Mr. Danny Jackson in 1994 and I thank him for the use of this short exert from the full video. The quality of the video is poor and is a copy of a copy in VHS format. I have edited it and changed it to DVD digital format. Although the quality is poor it is a precious archive preserved so many can see.
See part 1 of this video at:
http://www.youtube.com/watch?v=YKxKtvwFqr8
See Part II at:
http://www.youtube.com/watch?v=t3uwoxe_UYY

Ripley County's most decorated veteran. He was a member of the 508th Parachute Infantry of the 82nd Airborne Division and participated in the D-Day landing at Normandy. He also participated in the Battle of the Bulge and was wounded on June 9, 1944 in the European Theatre. Mr. Jahnigen's citations included the Purple Heart, Bronze Star, Silver Star, European Campaign Medal, Victory Medal, Good Conduct Medal, Distinguished Unit Citation, French Fourragere, Netherlands Citation, and the Normandy, Belgium, French, and American Defense Medals. On June 27, 1945 he received a battlefield commission promoting him to Lieutenant.
Posted by Jack WB9OTX at Sunday, October 12, 2008