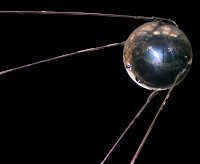 The Sputnik program was a series of unmanned space missions launched by the Soviet Union in the late 1950s to demonstrate the viability of artificial satellites for exploring the upper atmosphere as part of the International Geophysical Year. It included Sputnik 1, the first man-made object to orbit earth. The Russian name "Спутник" means literally "co-traveler" or "traveling companion" or "satellite". The R-7 launch vehicle was designed to carry nuclear warheads.


From Wikipedia, the free encyclopedia
Posted by Jack WB9OTX at Wednesday, October 03, 2007