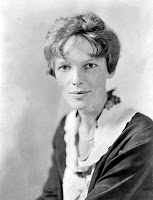 Aviation pioneer Amelia Earhart (pictured) and navigator Fred Noonan disappeared over the Pacific Ocean during an attempt to make a circumnavigational flight.
Disappearance of Amelia Earhart is one of the most intriguing mysteries. She was an ambitious woman pilot and a symbol of independent woman. Amelia held many records in flying but her final challenge was circumnavigation of the globe in her specially equipped twin engine plane named Electra. Howland Island which is a tiny island in the middle of the South Pacific was her final stop. But Amelia never reached this island. It was on July 2, 1937 that Amelia and her fellow navigator Fred Noonan went missing as they were flying over the Pacific. This was in the last leg of their aerial circumnavigation of the world. The mysterious disappearance of Amelia Earhart along with her fame led to various theories.
READ MORE AT:
http://annoyzview.wordpress.com/2012/05/11/disappearance-of-amelia-earhart/
and
http://en.wikipedia.org/wiki/Amelia_Earhart
Posted by Jack WB9OTX at Monday, July 02, 2012