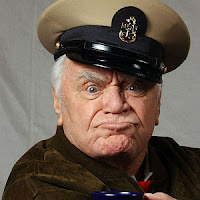 American actor Ernest Borgnine, when he was made an honorary chief petty officer of the United States Navy in October 2004. After being discharged from the navy after World War II and having no direction in his life, Borgnine began his acting career on the advice of his mother, who thought his personality was well-suited for the stage. This began a six-decade period mostly as a character actor on stage, film, and television. His most famous roles were as the lead inMarty, for which he won the Academy Award for Best Actor, the title role in McHale's Navy, and as a voice actor in the cartoon series SpongeBob SquarePants.
Read More
Posted by Jack WB9OTX at Wednesday, July 11, 2012