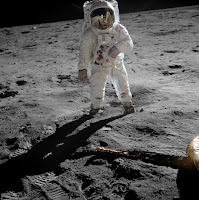 Apollo 11 was the spaceflight which landed the first humans, Americans Neil Armstrong and Buzz Aldrin, on the Moon on July 20, 1969, at 20:18 UTC. Armstrong became the first to step onto the lunar surface 6 hours later on July 21 at 02:56 UTC. A third member of the mission, Michael Collins, remained alone in lunar orbit until they returned from the surface about 15 hours later. All 3 returned to Earth safely after travelling in space for 8 days.
Read MORE
Posted by Jack WB9OTX at Friday, July 20, 2012