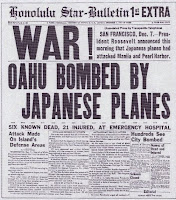 Aircraft and midget submarines of the Imperial Japanese Navy began an attack on the U.S. The Americans had deciphered Japan's code earlier and knew about a planned attack before it actually occurred. However, due to difficulty in deciphering intercepted messages, the Americans failed to discover Japan's target location before the attack occurred.[6] Under the command of Admiral Isoroku Yamamoto, the attack was devastating in loss of life and damage to the U.S. fleet. At 06:05 on December 7, the six Japanese carriers launched a first wave of 183 aircraft composed mainly of dive bombers, horizontal bombers and fighters.[7] The Japanese hit American ships and military installations at 07:51. The first wave attacked military airfields of Ford Island. At 08:30, a second wave of 170 Japanese aircraft, mostly torpedo bombers, attacked the fleet anchored in Pearl Harbor. The battleship Arizona was hit with an armor piercing bomb which penetrated the forward ammunition compartment, blowing the ship apart and sinking it within seconds. Overall, nine ships of the U.S. fleet were sunk and 21 ships were severely damaged. Three of the 21 would be irreparable. The overall death toll reached 2,350, including 68 civilians, and 1,178 injured. Of the military personnel lost at Pearl Harbor, 1,177 were from the Arizona. The first shots fired were from the destroyer Ward on a midget submarine that surfaced outside of Pearl Harbor; Ward sank the midget sub at approximately 06:55, about an hour before the attack on Pearl Harbor. Japan would lose 29 out of the 350 aircraft they attacked with.
Read More or Click here to See a Rare Color Film of Pearl Harbor attack
Below is a video of Franklin Delano Roosevelt - Pearl Harbor Address