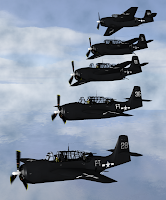 Flight 19 was the designation of five TBM Avenger torpedo bombers that disappeared on 5 December 1945 during a United States Navy-authorized overwater navigation training flight from Naval Air Station Fort Lauderdale, Florida.[1] The assignment was called "Navigation problem No. 1", a combination of bombing and navigation, which other flights had or were scheduled to undertake that day.[2]

All 14 airmen on the flight were lost, as were all 13 crew members of a PBM Mariner flying boat assumed to have exploded in mid-air while searching for the flight. Navy investigators could not determine the cause for the loss of Flight 19 but said the aircraft may have become disoriented and ditched in rough seas after running out of fuel.

Argosy magazine published an account of the incident using elements first described in American Legion Magazine[citation needed]. Subsequently, writers on the paranormal such as Charles Berlitz and Richard Winer used these sources and their own research to associate the incident with the Bermuda Triangle. The flight also features in the 1977 science fiction film Close Encounters of the Third Kind.

From Wikipedia, the free encyclopedia
Posted by Jack WB9OTX at Sunday, December 05, 2010