Guam has a very special place in my past, I ran hundreds of phone patches for the troops on this small island in the seventies...... Jack

The Second Battle of Guam (21 July – 10 August 1944) was the American capture of the Japanese held island of Guam, a United States territory (in the Mariana Islands) during the Pacific campaign of World War II. 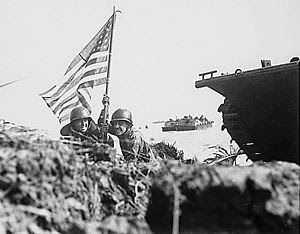 Two U.S. Marines (on the left is Captain Paul S. O'Neal of Brighton, Mass., and on the right is Captain Milton F. Thompson of Upper Montclair, N.J.) plant the American flag on Guam eight minutes after U.S. Marines and Army assault troops landed.