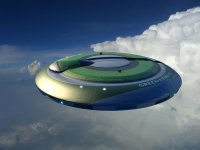 Captain Thomas Francis Mantell Jr. (30 June 1922 – 7 January 1948) was a United States Air Force serviceman and a World War II veteran. Mantell was awarded the Distinguished Flying Cross for courageous action during the Normandy landings, and an Air Medal with three Oak leaf clusters for heroism. In 1948 Mantell became involved in a presumed UFO incident and died on the same day, when his aircraft ultimately crashed near Franklin, Kentucky. The incident was the subject of headlines across the country and has been named for Mantell.  Mantell was the first member of the Kentucky Air National Guard to die in flight. According to John Trowbridge, historian of the Kentucky National Guard, "There is a real X-Files twist to this, too. Mantell lived almost his entire life in Louisville. But he was born in a hospital in Franklin, only a few miles from where he was killed".
Read more