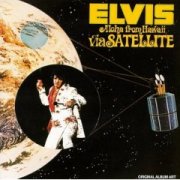 Aloha from Hawaii is a music concert that was headlined by Elvis Presley, and was broadcast live via satellite on January 14, 1973. The concert took place at the Honolulu International Center (HIC) in Honolulu (now known as the Neal S. Blaisdell Center) and aired in over 40 countries across Asia and Europe (who received the telecast the next day, also in primetime). Despite the satellite innovation, the United States did not air the concert until April 4, 1973 (the concert took place the same day as Super Bowl VII). Viewing figures have been estimated at over 1 billion viewers world wide, although it's debatable whether these figures are accurate. The show was the most expensive entertainment special at the time, costing $2.5 million.
Read More