As the Colors Pass 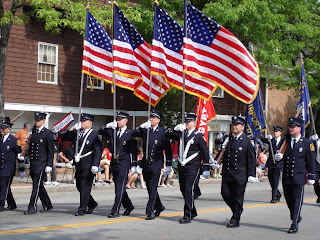 I was at the local pub just after the parade and was talking to several others that had just marched in the Pumpkin Show Parade. One said he could not believe that people would not stand and remove there hats when the Colors passed, some did, most didn't. I made the statement that we veterans gave them the right to not stand and remove thier hats. You could have heard a pin drop for several minutes. Think about it. ........ Jack
Posted by Jack WB9OTX at Sunday, September 30, 2012