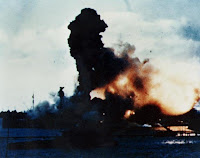 On Sunday morning, December 7, 1941 America's naval base in Pearl Harbor, Hawaii was attacked by the forces of the Empire of Japan. More than 2,400 Americans were killed and more than 1,100 were wounded. The attack sank four U.S. Navy battleships and damaged four more. It also damaged or sank three cruisers, three destroyers, one minelayer and damaged 188 aircraft. The day after the attack, the United States declared war on Japan and entered World War II. President Franklin Roosevelt, in a speech to congress, stated that the bombing of Pearl Harbor was "a date which will live in infamy"
Read More

From: Wikipedia & YouTube
Posted by Jack WB9OTX at Tuesday, December 06, 2011