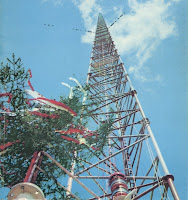 The Warsaw radio mast was the world's tallest structure ( 2,120.67 ft) until its collapse on 8 August 1991. It is the second tallest land-based structure ever built, being surpassed as tallest by the Burj Khalifa, completed in 2010.

Ham Radio operators love towers as we use these structures to transmit our signals. The rule of thumb states, "If it doesn't fall down it's not high enough". This one did in 1991.
read what happened
Posted by Jack WB9OTX at Sunday, January 30, 2011