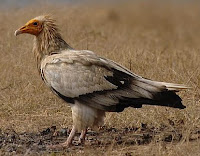 A griffon vulture with a wingspan of about 8 feet (2.4 m) was seen flying in Saudi Arabia, near the home of a shaikh, near the city of Hayel. When the bird was captured, a GPS device and a leg tag with the sign "Tel Aviv University" were discovered on the bird. The authorities were alerted that the vulture was a part of "Zionist plot". The story was first reported in Saudi Arabia's newspaper Al-Weeam, and was later discussed in Arabic websites and other Saudi Arabia media outlets
Read more
I just thought this was a neat article. After reading it, I think the bird was not a spy, but just equipped bwith a tracking GPS so the university could find the bird. My opinion only.......... Jack
Posted by Jack WB9OTX at Sunday, January 16, 2011