The Macintosh 128K machine was the original Apple Macintosh personal computer. Its beige case contained a 9 in (23 cm) monitor and came with a keyboard and mouse. An indentation in the top of the case made it easier for the computer to be lifted and carried. It had a selling price of US$2,495. The Macintosh was introduced by the now famous US$1.5 million television commercial by Ridley Scott, "1984", that most notably aired on CBS during the third quarter of Super Bowl XVIII on January 22, 1984. The sales of the Macintosh were strong from its initial re 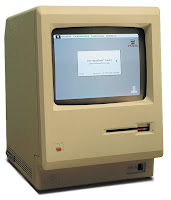 lease and reached 70,000 on May 3, 1984; afterwards, sales plummeted. After its successor — the Macintosh 512K — was introduced, it was rebadged as the Macintosh 128K to differentiate it.
Read more

I bought my first computer in 1982, it was an IBM clone called a Compuadd. It had a 40 meg hard drive and had 1 meg of ram. It ran the OS of MS DOS. If I remember correctly it had a pricetag of $2,300. I now have 7 computers running most of the time, but my favorite is a small net book that sold for $225. I now have an in-home successful business that I owe to that little first computer. ...... jack
Posted by Jack WB9OTX at Monday, January 24, 2011