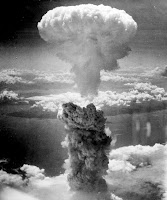 During the final stages of World War II in 1945, the United States conducted two atomic bombings against the cities of Hiroshima and Nagasaki in Japan. After six months of intense strategic fire-bombing of 67 Japanese cities the Japanese government ignored an ultimatum given by the Potsdam Declaration. By executive order of President Harry S. Truman the U.S. dropped the nuclear weapon "Little Boy" on the city of Hiroshima on Monday, August 6, 1945, followed by the detonation of "Fat Man" over Nagasaki on August 9