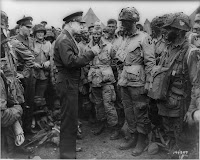 This is a remembered day as my brother Jim fell on this day..... Jack

The invasion of Normandy was the invasion and establishment of Allied forces in Normandy, France, during Operation Overlord in World War II. The invasion was the largest amphibious operation in history. This article covers from the initial landings on 6 June 1944, until the time of the Allied breakout in late July.

Allied land forces that saw combat in Normandy on 6 June came from Canada, the Free French Forces, the United Kingdom, and the United States. In the weeks following the invasion, Polish forces also participated, as well as contingents from Belgium, Czechoslovakia, Greece, and the Netherlands.[5] Most of the above countries also provided air and naval support, as did the Royal Australian Air Force,[1] the Royal New Zealand Air Force, and the Royal Norwegian Navy.[2]

The Normandy invasion began with overnight parachute and glider landings, massive air attacks, naval bombardments, early morning amphibious landings on five beaches codenamed Juno, Gold, Omaha, Utah, and Sword and during the evening the remaining elements of the parachute divisions landed. The "D-Day" forces deployed from bases along the south coast of England, the most important of these being Portsmouth
Read More
Posted by Jack WB9OTX at Sunday, June 06, 2010