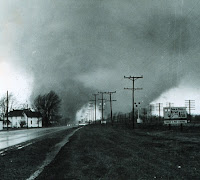 The second Palm Sunday tornado outbreak occurred on April 11, 1965 and involved 47 tornadoes (15 significant, 17 violent, 21 killers) hitting the Midwest. It was the second biggest outbreak on record. In the Midwest, 271 people were killed and 1,500 injured (1,200 in Indiana). It was the deadliest tornado outbreak in Indiana history with 137 people killed.[1] The outbreak also made that week the second most active week in history with 51 significant and 21 violent tornadoes.
Complete Story
Posted by Jack WB9OTX at Sunday, April 11, 2010