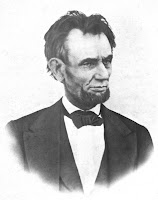 One of the last major events in the American Civil War, took place on Good Friday, April 14, 1865, when President Abraham Lincoln was shot while attending a performance of Our American Cousin at Ford's Theater with his wife and two guests.