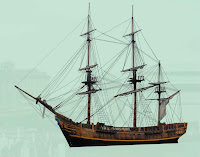 The mutiny on the Bounty is a mutiny that occurred aboard the British Royal Navy ship HMS Bounty on 28 April 1789, and has been commemorated by several books, films, and popular songs, many of which take considerable liberties with the facts. The mutiny was led by Fletcher Christian against the commanding officer, William Bligh. The sailors were attracted to the idyllic life on the Pacific island, and repelled by the alleged cruelty of their captain.

Eighteen mutineers set Captain Bligh and most of those loyal to him afloat in a small boat. The mutineers then settled, some in Tahiti in 1789, others on Pitcairn Island, with Tahitians they had befriended. The Bounty was subsequently burned to avoid detection and to prevent desertion. Descendants of some of the mutineers and Tahitians still live on Pitcairn.

After Bligh and his crew of 18 made an epic and eventful journey in the small boat to Timor in the Dutch East Indies, he returned to the United Kingdom and reported the mutiny.