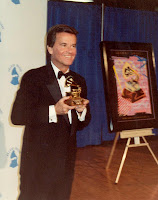 Richard Wagstaff "Dick" Clark (born November 30, 1929) is an American television, radio personality, game show host and businessman; he served as chairman and CEO of Dick Clark Productions, which he has sold part of in recent years. He is best known for hosting long-running television shows such as American Bandsand, five versions of the Pyramid game show, and Dick Clark's New Year's Rockin' Eve.